Breaking News
Home / Reports / Could Glass-Steagall Crown the Next King on Wall Street?… 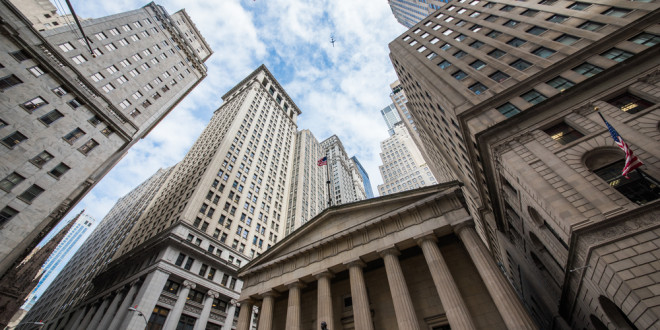 Could Glass-Steagall Crown the Next King on Wall Street?…

Trump’s economic reform policy could the next part of an “Art of the Deal” doctrine signaling that lawmakers are now wanting modern Glass-Steagall bank reform. That would mean a major shakeup on Wall Street, in markets and a new found king within the world of big finance.

Gary Cohn, chairman of the power heavy National Economic Council, privately told members of the Senate Banking Committee that he supports a policy to breakup the big banks.

Cohn, the former co-president and co-chief operating officer at Goldman Sachs, is seen by many to be the leading advocate in the White House to press for the revival of the Glass-Steagall Act.

During the 2016 election cycle the Republican party platform, which even then candidate-Trump championed, had identified that:

“We support reinstating the Glass-Steagall Act of 1933 which prohibits commercial banks from engaging in high-risk investment.

Sensible regulations can be compatible with a vibrant economy.”

The Glass-Steagall Act was a major part of legislation during the depression to try and correct the volatile risks posed by Wall Street and the financial system.

What the legislation did was place limits on investment banks and those financial institutions that were involved with brokerage firms which would also be responsible for underwriting (and in many cases dishing out stocks) with commercial banks that held FDIC insured funds.

Put simply, the legislation was a practical way of preventing dangerous speculation and mounting greed that would viciously blow up — all while putting Main Street America at risk.

The legislation was set in place to protect the U.S economy and its major banks for more than 65 years until its eventual repeal during the Clinton Administration in 1999.

It took less than a decade for the financial system to inflate enough with too big to fail institutions to bring the entire economy back to a near 1930’s-era crash.

By playing with FDIC insured funds as a “golden parachute” Wall Street financiers could entrust any losses taken to be bailed out with the taxpayer money.

This was not legislation for rules sake, but an act for the sake of Main Street America.

Since the massive financial crisis in 2008 and a series of taxpayer funded bank bailouts — inflated “too big to fail” institutions are now bigger and more dangerous than before.

As former Congressman and Reagan budget director David Stockman pressed in his case for Glass-Steagall legislation, “Wall Street is run by a generation that has been bailed-out too many times to count.”

“The big banks have been blatantly and egregiously coddled by perverse central bank theories and practices that have turned the nation’s capital and money markets into veritable gambling casinos.”

Glass-Steagall Could Make Goldman the King of Wall Street

It is no secret that the world of big finance rejects any signs of sweeping regulation in the market.

Just last week, JPMorgan’s Jamie Dimon released a report claiming that too big to fail had essentially been solved.

While this jaded thinking may be understandable from Wall Street, even those orchestrating global monetary policy seem to be jaded.

Janet Yellen, the chairman of the Federal Reserve, when asked about a 21st Century Glass-Steagall not only repressed any possibility to the common-sense legislation, but outright denied that any viable solutions existed.

She noted from the speaking dais that,

“I’ve not seen any concrete proposals along this line. I don’t really know what a 21st Century Glass-Steagall would look like. I think my reading on the financial crisis is that wasn’t the major source of the financial crisis, in fact many of the problems emanated from firms that were investment banking units.”

“To me, an important reform in the aftermath of the crisis was to make sure that investment banking activities that were a core part of the shadow banking system where leverage had built, that those were appropriately capitalized, had appropriate liquidity and their management was strengthened and that’s what we have tried to do. But obviously we would look at any proposals that are put forward. I’m not aware of anything concrete to react to.”

The Fed is the top government regulator in charge of some of the most risky bank holding companies in the world. If its leadership can’t see any concrete proposals — why should those on Wall Street?

While the repeal of Glass-Steagall under President Clinton does not alone stand as the catalyst that caused the 2008 crash, it still props up the “high-risks make high-rewards” culture in the world of big finance.

Christopher Whalen highlighted exactly what that reduction in of risk culture would look like in The Institutional Risk Analyst noting, “We should slowly mandate that the big banks get smaller and also gradually separate dealing activities from the depository over a period of 5-10 years.”

All this begs with reason, would a President Trump’s White House together with Gary Cohn cross their old banking alliances and a Fed responsible for bailing them out?

Gary Cohn’s star power and prowess in the White House is already on the rise.  Mainstream media outlets have already started to place him as the “shadow chief of staff” and a potential replacement candidate for Reince Priebus.

Under President Trump’s White House, Cohn could be the dark-horse cheerleader for Glass-Steagall that shakes up of old banking alliances.

Banks like JPMorgan Chase, Citibank, Bank of America and Wells Fargo would take losses from a modern Glass-Steagall. That’s because they have significant commercial banking operations.

Walk through any mall or in route to an airport terminal and you’re likely to see an ATM from one of those major banks.

In contrast, Cohn’s old stomping grounds at Goldman Sachs could come out on top. Since the 2008 bailout, Goldman now has fewer deposits and less of a retail focused business operation.  Goldman reaped the benefits of being a bank holding company, received its bailout funding and has now moved on to the next target.

This could also be a case in which the group of Goldman Sachs alumni that fill the White House are simply taking on special interests.

As Dennis Kelleher, the President and CEO of Better Markets, warned, “Most troubling about Mr. Cohn’s possible embrace of Glass-Steagall is the potential benefits that would be uniquely enjoyed by his former firm, Goldman Sachs.”

Mr. Kelleher, who leads a nonprofit focused on promoting financial reform of Wall Street, further expressed that, “A Glass-Stegall-like change done wrong could move Goldman back to the investment and trading side of light regulation, boosting its profits, business lines and competitive position.”

“Thus, once again it would be king of the financial world where bank holding companies couldn’t compete.”

A modern Glass-Steagall Act would also depend on this: If you split up each banking service under one major bank, how would they be regulated? Could investment banks then avoid certain regulations? And most importantly, where does a potential FDIC, taxpayer insured banking, system come into play?

This has all, indeed, happened before.

Financial historian, economist and former Goldman Sachs managing director Nomi Prins revealed that the major divide between Goldman and Chase banks today is what unfolded during the original Glass-Steagall creation.

Nomi Prins presses on the rhetoric from Cohn is similar to banker talk before noting, “This was very much the story of Winthrop Aldrich and J.P. Morgan in the 1930’s where Chase bank gained competitive advantage over the Morgan bank.”

Prins’ digs deeper though, “It’s a complete flip from what Cohn indicated before when he noted the need for banks to be more free in markets and have less restrictions.”

She cautiously warns that there’s a big deal being made here of the gambit Cohn has made.

“What would a Cohn generated Glass-Steagall look like? I remain in the position of, ‘watch what he does not what he says’.”

Regardless of the outcome, by treating the investment banking sector as a hike stakes casino regular people have been put into the fray of turmoil reaped on the global economy.

Make no mistake, the build up of too big to fail institutions has caused economic turmoil. Their continued inflation, as we’ve seen in the derivatives market, will almost assuredly cause the next crisis.

So is this a head fake? Is Gary Cohn simply taking “an easier pill to swallow” approach for an alternative policy later?

Speaking to American Banker Edward Mills, a policy analyst at FBR Capital Markets said, “Should Congress actively consider a reinstatement of Glass-Steagall, the details of the proposal would be a significant consideration.”

The analyst went on, “Additionally, the motive of supporters will matter. If this is seen as a backdoor way to help Goldman Sachs and Morgan Stanley shed Federal Reserve supervision, it could become politically toxic, especially among Democrats.”

Indeed, the devil is in the details.

As a tax reform bill or even an infrastructure spending package could be a dividing line for Congress – so too could any modern version of Glass-Steagall.

The most urgent matter then becomes time.

Jim Rickards, a currency wars expert and New York Times bestselling author scratches at the real story between Wall Street and Washington that could be unfolding. According to Rickards’ latest analysis a financial bubble could burst at any moment and be much worse than what was experienced in 2008.

“The problem is that bank lobbyists control the Congress and will stand in the way. The statements from Cohn were first published last last week. By the next morning the bank lobbyists and their communications strategists were already pouring cold water on it.”

Rickards warns, “Time will tell. The problem is we may not have that much time before the next financial avalanche. Investors need to protect their wealth now without relying on the White House to do battle with the banking cartel.”

Whether the Glass-Steagall proposal is an attempt to make Goldman Sachs the king of the financial world or there is real credibility behind Cohn’s rhetoric — time and motive will be important to watch. Hopefully both indicators do not come too late.

Thanks for reading,
Craig Wilson, @craig_wilson7
for the Daily Reckoning

Previous Market Profile Analysis of S&P Futures – 04.13.17…
Next An RRSP is not a Retirement Plan…

The American Empire at Sunset…

Let’s start with the basics. There’s no evidence that lockdowns work to stop the spread ...