Breaking News
Home / Under $10 / Marijuana News Today: If This Issue Can Be Resolved, Expect Pot S… 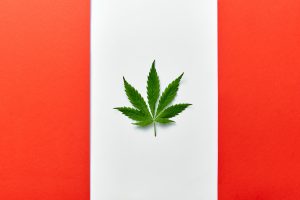 Marijuana News Today: If This Issue Can Be Resolved, Expect Pot S…

The marijuana news today has some progress being made (hopefully) in an exceedingly important area for pot stocks. Government regulations in Canada are being called on by an industry group to be reworked—in the hopes of increasing legal sales and share value of Canadian pot stocks.

The problem is one we’ve long covered in this column. Government regulation is often burdensome, getting in the way of legitimate marijuana businesses growing at their natural rates.

Oftentimes the regulatory burden, in fact, benefits the black market by artificially raising legal weed prices while allowing black-market prices to comparatively seem like a bargain.

The marijuana news today has the Cannabis Council of Canada fighting back with a letter to Premier Doug Ford in Ontario, Canada’s largest market by population and value.

Right now, Ontario is horribly under-served in terms of how many brick-and-mortar legal marijuana shops are currently operating in the province. There’s about one legal storefront per 590,000 people, whereas in many other provinces, that ratio is as low as one store per 14,000 people. (Source: “Cannabis Council of Canada Letter,” Cannabis Council of Canada, October 28, 2019.)

The open letter identifies that as a key problem plaguing the industry at this moment.

“Unfortunately, our ability to continue to invest and sustain the jobs that we have created is being severely challenged by the province’s current retail cannabis policy framework,” the letter says.

“[W]e urge you to instruct your Ministers and officials to make every effort to enact all the necessary regulations to allow the number of private cannabis retail points of sale to significantly increase to support Canada’s licensed cannabis producers.”

It’s a pretty straightforward plea and one that Premier Ford, who is known for being pro-business, may be open to hearing.

The letter goes on to dispel the idea that there are industry concerns around supply, claiming that there is “ample supply of cannabis for the adult recreational market – there simply is no longer a shortage.”

The letter also mentions that the illicit cannabis market is the real winner when onerous regulatory burdens get in the way of the private cannabis sector.

Too few storefronts means fewer points of access for consumers, which means they may turn to their tried-and-true black-market dealers who have been in business for decades and have proven themselves reliable.

If marijuana stocks are to reach their full potential, we’ll have to see a radical crackdown on the massive, billion-dollar black market that is still very healthy.

The illicit “dispensaries” which are still operating in cities and towns across Ontario offer no such protection and should be shut down.We also urge your government to revisit the policy which precludes licensed producers from operating more than a single cannabis retail store at one of their production facilities.

Again, this is another failure of the government, with many black-market storefronts opening across Ontario but few of them being shut down for good.

Ultimately, marijuana stocks need governments’ support around the globe if they’re going to reach their full potential. The Ontario government could go a long way toward meeting that goal if it would listen to the issues raised in the open letter (and this column).

Aside from the political machinations of the pot business, we also have some movement on the marijuana stock market that’s worth looking into.

One of the biggest recent cannabis stock surges came from CannTrust Holdings Inc (NYSE:CTST). CannTrust stock jumped by eight percent in early-morning trading today, and it has climbed nearly 13% over the past five days.

CannTrust, you may remember, had its license stripped from it by Health Canada after one of its factories was deemed to have been growing pot without properly following regulations.

Despite what I wrote in the first part of this column, following regulations on growing cannabis is not something I would deem especially onerous.

In any case, the result of CannTrust’s trouble with Health Canada was that CTST stock suffered mightily. The stock plummeted hard and fast and has sunk so low that now it’s arguably one of the better picks in the marijuana stock market.

While I’m doubtful as to just how high CannTrust stock can climb, what is undeniable is that CTST stock is prone to big surges from time to time, something we’ve seen over the past several weeks.

While those gains are usually not sustained, at the very least, when investors buy CannTrust stock on a dip, they can be confident that a 10% jump is likely in the company’s near future, allowing for a quick gain before fleeing to more reliable investments.

It’s a riskier investment opportunity, as it is not based on a long-term strategy, but rather one that’s entirely reliant on timing. Nevertheless, CTST stock could be very profitable for some.

Another pot company that is seeing a small jump in share price is Tilray Inc (NASDAQ:TLRY), but Tilray stock is in a very different position than CannTrust stock.

TLRY stock saw a gain of a point in early-morning trading today, but it is down about five percent over the past five days.

Tilray, of course, is most famous for being the first marijuana initial public offering (IPO) on a major U.S. exchange, when it listed on the Nasdaq in the summer of 2018.

Tilray stock saw massive gains in the immediate aftermath of its IPO, but I was never sold on the company, and the stock has since seen most of those gains disappear in 2019.

But that brings us to an important question: is TLRY  stock now finally appropriately priced?

In my mind, it’s close. I believe that the Tilray stock price will hold around $30.00 in the near future, meaning that gains of about 50% are not impossible in the coming months.

While the marijuana stock correction has been especially brutal, there’s nothing to indicate that it will be any more permanent than the last corrections.

What we’re waiting for is an industry-moving event that will rescue pot stocks from their current troubles and deliver them back to their former glory. While we don’t know when that will happen, I’m fairly confident that it’s just a matter of time.

As such, I’m bullish on the long-term outlook of TLRY stock, even if the next few weeks and months remain bleak.

The performances of CTST stock (black line) and TLRY stock (blue line) over the past week are seen in the chart below: 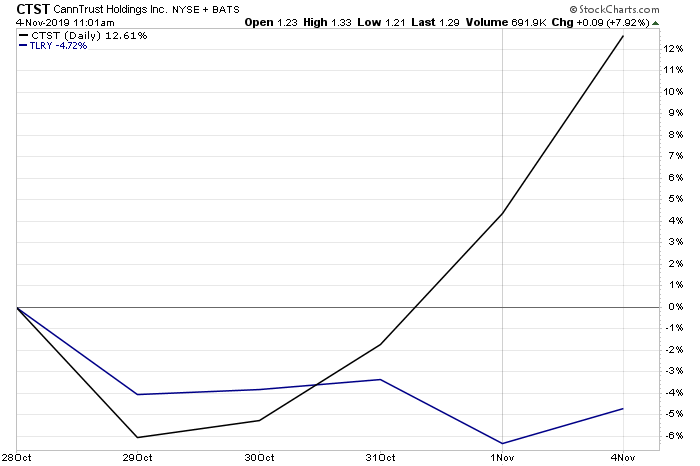 The regulatory burden is holding many pot stocks back from their full potential, and it needs to be curbed as quickly as possible in order to see revenue grow and share prices rise in tandem.

Previous Dividend Income – October 2019…
Next Up for a Raise? Use These Five Strategies to Make It Happen…. 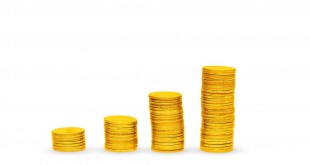 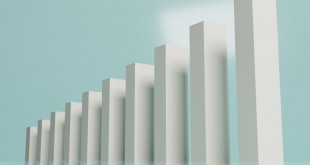 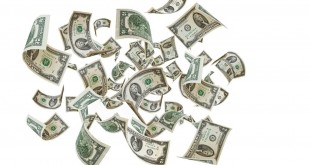 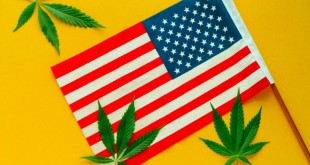