They Don’t Prepare For Each and Every Trading Day

If you’ve ever watched your television before a sporting event, sometimes the camera will show the players getting ready in the locker room or on the court/field. In the locker room, they’ll be listening to music or having their trainers tape up their ankles or hands. On the court/field, they’ll be warming up and stretching getting their mind and body ready for their upcoming game or match. They have a specific routine that they go through before they go out and play. Professional athletes are paid millions of dollars to perform their sport at a very high level. They know that they must prepare physically and mentally to compete and to ensure that they don’t get injured. Some traders are paid millions of dollars to make investment decisions just like professional athletes.

We, as traders, also must prepare physically and mentally to compete in the arena of trading. We must prepare physically, but first, there are several areas that we must focus on. We must first complete homework to take into account the context of the market for that particular trading session. When we do our homework, we need to create a trading plan that has a minimum of three different scenarios. This stretches our minds and allows our creativity to flow. In addition, it will prevent us from creating a directional bias and will allow us to focus on the information that the market is generating. Second, we must ensure that we have sufficient sleep, food, and hydration. If we are lacking in one or more areas, our body will not be in the optimum state to deal with the stresses from the market. Lastly, a workout routine will definitely help your body manage stress and achieve an optimal state.

The most important type of preparation that athletes and traders must perform is mental preparation. Professional athletes have rituals that they rehearse to try to reach the apex of physical and mental execution called the “zone.” The zone is where an athlete reaches a transcendent level of performance. Michael Jordan was especially adept at reaching that level because he used to visualize an entire game in his mind before he ever stepped foot onto the court. He played every scenario that could ever happen on the basketball court in his mind over and over again. He was a virtuoso with a basketball because he had already played that exact scenario in his head before he saw it on the court. The mind is a powerful instrument but it cannot tell the difference between visualization and the real thing. In other words, the mind fires off the same neural pathways light up if you’re visualizing or trading for real. Using a mental dress rehearsal before your trading session will help you keep a level head when different scenarios appear because you’ve already imagined it in your mind beforehand. 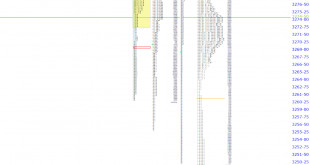 https://shadowtrader.net/ The Market Profile value areas and ShadowTrader Pivots for /ESZ20 and /NQZ20 Futures are ...